God made all sorts of wild animals, livestock, and small animals, each able to produce offspring of the same kind. And God saw that it was good. –Genesis 1:25 (NLT)

I love that last part: God saw that His creation was good. Simply put, He loved them. And, it has never been lost on me that God created animals before He created man and woman. His word tells us that He gave responsibility for the animals to those He created in His own image. (Genesis 1:26) Ponder on that a bit. If we were created in God’s image then we have a clear direction for how we are to treat others — and that includes animals.

I have a cousin who is a rescuer of cats with special needs. Some come to her lame, blind, sick from infections, horribly ridden with fleas, and many are traumatized by abuse. These little creations of God are found abandoned, even thrown in trash containers. It’s heartbreaking. But the happy part is seeing how Jeanie and a caring cat clinic rally to make most of them well and give them a chance at life.

Some time back, I volunteered at our local Humane Society. The Humane Society operates no-kill shelters. Every effort is given to providing a safe haven for dogs and cats. Hopefully, most will be adopted out to good homes. You will never see them euthanized unless there is absolutely no quality of life left for the animal. Let me give you an example I saw firsthand.

Tabitha, a cat thought to be eight or nine months old, came to the shelter pregnant. She was far too young (small) to carry what turned out to be a litter of seven. But Tabitha did it, delivering all seven alive and healthy. However, there were two kittens that had badly deformed back legs, most likely from their crowded quarters. Their tiny legs looked as if they had been put on backward; they bent in the wrong direction.

I was at the shelter just hours after Tabitha delivered and found a small crowd gathered around mom and babies.  Laura, the cat adoption manager, pleaded the case for these new babies. She was imagining all sorts of ways their crippled legs might be helped. It was decided by one of the vet techs to try tiny leg splints. She whittled away at a tongue depressor until she had splints about the width of a toothpick and half its length. She wasn’t all that hopeful the splints would work, but willing to give it her best shot.

For six weeks, Tabitha and all seven kittens lived in Laura’s office. The two in splints required close watch and frequent changing of the splints to maintain cleanliness; the others were kept there to lend family love and support.

It was an ideal outcome: After six weeks in splints, the kittens’ legs were corrected to normal shape and without one bit of evidence that there had ever been a problem. Those little babies, named Sara and Foster, learned to walk while in the splints and were ready for foster care at eight weeks, along with the rest of the litter.

That was just one of many miracle stories I saw there. It was a sheer joy to know that individuals were living out God’s direction to be responsible in the fullest sense. I think people like this really make God smile.

The Humane Society carefully investigates those who seek to adopt. You don’t just walk in and walk out with a cat or dog. If approved for adoption and for any reason it doesn’t work out in the home, the cats and dogs are always welcome back to the HS. In fact, part of the adoption process is to sign an agreement that you will return your adopted cat or dog if for any reason you can’t keep it. Once a rescue of the Humane Society, an animal is never again without a place to call home.

It is the same kind of process for my cousin Jeanie’s rescue site. Those who care so tenderly for helpless animals don’t want to have them traumatized all over again through lack of care or abandonment.

If you have animals, treat them well. God gave us that charge at the beginning of time. If you are looking for volunteer opportunities, think about a local animal shelter. Finally, consider making a charitable contribution to a rescue site. Be reminded that God cares for people and animals alike (Psalms 36:6 NLT). 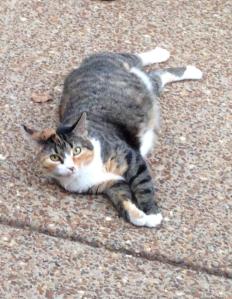 I adopted Chloe while volunteering at the Humane Society. It was one of my best decisions.