Sometimes I think about the day my grandfather was told he had a terminal illness. Daddy had called to let me know Papa was being admitted directly from his doctor’s office to the hospital. I told Daddy I would meet them there.

When I got to Papa’s room, he was sitting on the side of the bed, still wearing his hat. He looked so tired and I encouraged him to lie down. He did without a word of protest, but with his shoes still on. I slipped them off his feet. My grandmother stood quietly by, grave concern etched on her face. Mama and Papa had been married 65 years—since they were 16 and 18.

We didn’t have to wait long for Papa’s physician. He came into the room, sat down in a chair near Papa’s bed and gave us a diagnosis we didn’t want to hear: acute leukemia. Papa’s physician said that without treatment he would live maybe two months. With treatment, he might live two years, but there would be no quality of life and he personally could not advise that route. If Papa wanted treatment, he would refer him to a specialist.

Without hesitation or questions, Papa said “I’ve lived a good long life and if it’s my time to go, I’m all right with that, I’m ready.” It was a clear statement of his faith; he had no fear in dying. 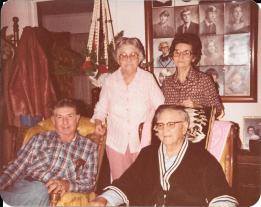 A picture made when Papa was so sick. One of the rare times he was out of bed. Mama stands between their two oldest children, J. B. and Louise.

Papa left that hospital bed for one at home where his children and their spouses took care of him, never leaving Mama to do it alone. He lived shy of a year—nine months I believe it was, but longer than the two months predicted. His doctor said it was his strong body that gave him added time. Papa had been so healthy all his life; he had never seen a doctor for anything but the annual renewal of his barber’s license.

To remember Papa is to remember how tender his heart was toward God. I never heard him pray without crying. He just couldn’t get to the “amen” without emotion spilling over. Both my grandparents deeply loved the Lord. Jesus was as much a resident of their home as Papa and Mama. They trusted God implicitly and gave God all the thanks.

When Papa died, Mama wrote in her journal “Jim went home to be with Jesus today.”  Simply and accurately put. They never doubted where they would spend eternity. And to their credit and as best I know, none of us, children or grandchildren, has doubted either. Jim and Dulcie Spencer made sure of that.

So, when I remember Papa, I remember first his love for the Lord and a faith that let him say, when it’s my time, I’m ready. I give thanks for this man’s life and the rich heritage he gave to me.

You will keep in perfect peace those whose minds are steadfast, because they trust in you.  –Isaiah 26:3 (NIV)