Isn’t she beautiful? Shortly after birth, Maddie had a stroke, developed E. coli meningitis, and spent three weeks in a coma. She survived it all somehow, and went home. Her parents were not prepared or maybe of the mind to take care of her and for eight years, Maddie lived a life of neglect. Shortly before she was nine, the family relinquished Maddie to the Department of Human Services (DHS).

Now meet my friend, Wilda, an instrument of God’s love. She and her husband Randy have fostered over 100 children. Of that 100 plus children, they adopted six of them. They had two biological children, one killed at the age of seven by a drunk driver. Jeremy was crossing the street in a pedestrian right-of-way when the car hit him. Yet in the midst of their grieving, they held to their decision to be foster parents, bringing home a little girl who became the very first of their adopted children. Some hearts simply have more capacity to forgive and move on toward the purpose God calls them to.
Maddie had been with DHS just one month when they approached Wilda about taking her. They were upfront, explaining she had suffered severe brain damage, costing her 80% of brain function on one side and 30% on the other. She would not be able to walk or talk. She would not be able to tell Wilda if she hurt or show any emotion, DHS said. She had frequent seizures. She was bottle fed and it was so hard for her, she used up calories trying to eat. She weighed just 33 pounds. Yet with all this, Wilda said yes to Maddie and took her home in September of 2013.
Wilda’s goal with every child has been to give them as much quality of life as possible. First on her list for Maddie was a feeding tube so that she could receive proper nutrition and gain needed weight. The surgery happened in the spring of 2014, just months after Wilda became Maddie’s foster mom. But with that surgery came complications and Maddie spent 58 days in the hospital, a week of that time in Pediatric ICU on a ventilator. Wilda never left her side.

In a very short time, Maddie won Wilda’s heart and she knew she would adopt Maddie if ever there was opportunity. That time did come and in March of 2016, Maddie became Maddie Lahmann.

Maddie, will soon be 13, a teenager. In the four years Wilda has had her, she has been afforded as normal a life as possible. She is dressed beautifully each day, talked to, sung to, taken out in the sunshine, and helped to interact with household pets just like any little girl would want to do. 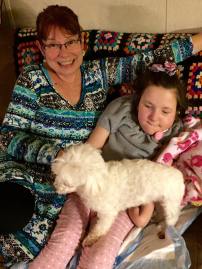 Has Wilda made a difference in Maddie’s life that Maddie can comprehend? Wilda certainly believes she has seen change and she carries videos with her to doctors’ visits to show evidence of Maddie seemingly exhibiting emotion. All of us who follow along with these two would quickly agree that Maddie is a different child. We believe she knows she is loved and secure with Wilda and in some ways may know some pleasure. There are certain songs and videos she seems to particularly enjoy.  I’ve seen videos where Maddie sounds as if she is trying hard to talk. And though she can’t tell her mother when she is hurting, Wilda has learned to read Maddie’s expressions, however subtle, and knows when to get her medical attention. That has led to the discovery of a broken bone and a urinary tract infection that went septic. Who really knows just what Maddie is able to understand? Regardless, Maddie will continue to receive the love and attention of a doting mother. Wilda says “I am so happy God put us together. He knew just what each of us needed.” 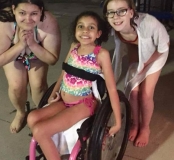 Kaliyha enjoyed some time in the pool with another of Wilda’s daughters and her granddaughter. Notice how very twisted her spine was.

You might think raising one child with severe disabilities would be enough for my friend, but after Maddie, she took in a little girl with severe scoliosis and a progressive neuromuscular disorder similar to muscular dystrophy. Wilda had her for fifteen months, seeing her through surgery to correct the scoliosis and kept Kaliyha until she could be returned to her family.

Christmas 2016, after Kaliyha had surgery to correct scoliosis and shortly before K went home.

Wilda’s most recent foster child is a little boy who will be five in November. He entered East Tennessee’s Children’s Home in July weighing just 19 pounds and now weighs 32.5.  Ty is micro cephalic (small head/brain) and has cerebral palsy. He can see and hear, but not speak or walk. Like Maddie, Ty has seizures, poor head control, and receives food through a feeding tube.

The child of parents with drug and abuse issues, any quality of life had probably been non-existent. It is undetermined how long this little boy will live with Wilda and Maddie but we can be sure he will experience many of life’s good things while there.

I asked Wilda to let me share her story because there is so much wrong in our world today and we need to see there are still some very good people doing very good things. Stories like Maddie’s warm my heart and the pictures and videos Wilda shares through social media of all her kids make me smile. Wilda’s philosophy is that God has a bigger plan for each of us and He always knows best, even when we don’t understand at the moment. “I know I am doing what God wants me to do,” she says.

Maddie and her mom. What do you think about Maddie showing emotion?