This past Election Day, many evangelicals believed that God’s man for this hour in our nation was elected. The numbers keepers tell us 81% of the evangelical vote went for Donald Trump. I am one of those evangelicals.

Conservatives believe that a school day opened with prayer and the pledge to allegiance is a good thing. We see it as putting God first, where He deserves to be. We believe our flag is to be honored and lifted high in respect and gratitude for those who have bravely fought for our freedom. We believe that our nation must come first as we work cooperatively with other nations.

President George Washington said “It is impossible to rightly govern a nation without God and the Bible.” That belief was still held when Abraham Lincoln said “Unless the great God who assisted (Washington) shall be with me and aid me, I must fail; but if the same Omniscient Mind and Mighty Arm that directed and protected him shall guide and support me, I shall not fail . . . Let us all pray that the God of our fathers may not forsake us now.” No one said it more clearly than President Ronald Reagan when he said “If we ever forget that we are One Nation Under God, then we will be a nation gone under.”

A friend called the day after the election and said she imagined I was very happy at the election’s outcome. I replied that what I felt most was relieved; relieved that God was giving us another chance to come back to Him. This mission of many to put God completely out of every public venue is misguided. Every faith is honored and given room today but the faith of Christianity. This is wrong and God will not be mocked. Want some proof of that? Read the stories in the Old Testament of those who did it their way rather than God’s way and see what they went through.

Why would God pick Donald Trump to use? Someone who sometimes speaks crudely and bombastically? I can’t answer that any more than I can explain why God used a drunk (Noah) to build an ark to save humanity. Nor why He used a murderer (Moses) to lead the people of Israel out of bondage. God turned Saul of Tarsus from a man who strongly supported the execution of Christians into Paul, a great missionary and builder of New Testament churches. Maybe God chooses the unlikely to show His great power over all, to demonstrate that the impossible with man is opportunity with God. I can’t explain God’s choices but I can line up and respect them. If I cast my vote incorrectly, time will soon tell. And if I made the right choice, it will be an exciting time for America as we watch God shape and use President-Elect Donald Trump.

“The counsel of the Lord stands forever, the plans of His heart from generation to generation. Blessed is the nation whose God is the LORD, the people whom He has chosen for His own inheritance.” Psalm 33:11-12 (NAS). 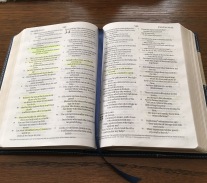 4 thoughts on “A Nation Under God”