A recent Guideposts story on job perspective really gave me pause. A man who had lost his job and had been unemployed for seven years was offered the job of janitor at his church. While he was grateful, his wife was not. It would require both of them and she felt it wasn’t important and fell beneath their potential. But as she received new vision on the job’s importance, and in some part the hidden roles it played, she reexamined her attitude and her life. She had an attitude shift—a new perspective.

I began thinking of those who clean our church and church school and wondered how they saw their jobs. Our buildings are immaculate: floors shiny clean, walls free of marks, bathrooms fresh and in order. It must take incredible attention and skill to keep them that way. Do our janitors see their work as important? Do they feel appreciated? Have I ever told them they are appreciated? 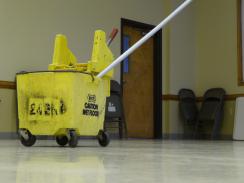 At a very large church next door to us, the cleaning duties are staffed by volunteers and headed up by a company executive. Keeping the church clean is a job he asked for, a way he desires to serve, and that service has provided $1.6 million in local and global missions. It’s pretty easy to see the value of their jobs, but it doesn’t have to be this dramatic to make a difference. Any building kept clean says a lot about what happens there, and probably nowhere is such a statement more important than in a church. The basics done with excellence indicate how other things are managed.

There is a quote I’ve always loved: “Every job is a self-portrait of the person who does it. Autograph your work with excellence.” While some jobs may take a while to reveal an individual, the profession of cleaning is a work that paints a self-portrait quickly.

Sometimes you have to reach bottom to understand the importance of basic work. That’s what happened to the man who for seven years had sought work like he had—that of a software developer. He came to a place where having a paying job was more important than what he did and he received the position offered him with gratefulness. He embraced it determined to do his best and six years later is still signing that work with excellence. The executive who cleans our neighboring church is a recovering alcoholic. That dealt with his ego in a powerful way and his way of serving others still goes strong after twenty years. Another self-portrait signed with excellence.

I began to think of other work that wasn’t so glamorous but ranked as valuable to most of us. What about the people who bag our groceries and take care to separate delicate items from heavier ones? Who limit the weight put in a bag? What about someone in a store who walks us to what we are looking for rather than pointing the way? The service people who come to our houses and put on shoe protectors at the door rather than tramping through with whatever they’ve brought with them from outside?

Every job is important and I’m going to be better at letting those with jobs that daily affect my life know I appreciate them. I hope you will join me in the doing the same.